Wishing I had my students in my pockets

Posted on March 18, 2013 by christine mccartney 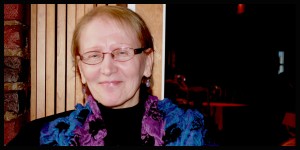 First and foremost, I must thank my mentor and new friend, Riitta, who took time out of her busy schedule as a senior faculty member of the School of Education at the University of Tampere, to treat me to a wonderful lunch today.  Aside from the fact that our conversation was extremely informative and I now feel like I have my foot in the door to begin my research, she also set me off on a little adventure around Tampere this afternoon.

So despite the fact that it was a chilly -4 degrees Celsius (that’s about 24 degrees Fahrenheit to my friends in New York), I was easily persuaded to trek around town by both Riitta’s suggestion, and the little tourist map she gave me (you know the type…everything looks like a cartoon and has a number corresponding to a list of attractions on the back).  Well, it wasn’t a difficult choice when I realized that the Tampereen Kaupunginkirjasto (Tampere City Library) was attached to the Tampereen Kivimuseo (Tampere Mineral Museum) because really, there IS NO END to my nerdiness when it comes to certain things.

Also, I had seen this ad, which someone mentioned had something to do with a comic exhibition at the library and given the recent student-led sit in against the Chicago Public Schools ban of the graphic novel Persepolis, I definitely wanted to go check it out.

Turns out the Mineral Museum is closed on Mondays, but the library was worth every painfully cold step it took to get there.  For starters, it looks like something designed by H. R. Giger, although it was really designed by Finnish architects, Reima and Raili Pietila, who are equally awesome (although I half expected Sigourney Weaver dressed as Ripley to greet me at the door).

It didn’t take long for me to be wishing that I could transport all of my students into the Young Adult section with me to see their faces light up with recognition as they scanned the shelves of books. 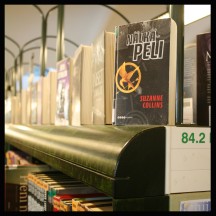 What a cool experience to see all of the titles that comprise our classroom library in Newburgh, New York translated into Finnish.  It really hit home the commonality of the adolescent experience in both countries.  I am so excited to get into the secondary schools here this week and begin conversations with Finnish students.  I wonder how they define themselves as readers and what books line the shelves of their classroom libraries.

There wasn’t really much to the comic exhibit, except I was thoroughly impressed with these little paper cutout dolls that were scattered all over a big table which overlooked the foyer of the library.  I am pretty sure they are saying nasty little tidbits, but google translate wasn’t much help with most of them.  There were literally hundreds and they stood like their own little army, poised and ready. It was impossible not took bend your face right down to them to get a closer look: 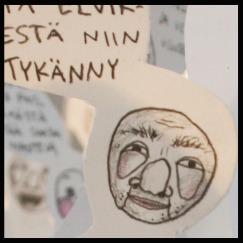 And I did so for at least five minutes.

Then just when I thought I had seen everything that the Tampere Library had to offer, I walked into the music section of the library and within minutes this happened:

So as you can imagine. I was loving every minute of it.

I am a teacher, a wife, a proud aunt, a dog rescuer, a person who has been rescued by my rescued dogs, a hiker, a four time (phew!) cancer survivor, a runner, a tattoo addict, a vegetarian, an advocate, a friend and a happy traveller. Enjoy!
View all posts by christine mccartney →
This entry was posted in Uncategorized. Bookmark the permalink.

8 Responses to Wishing I had my students in my pockets