A roller coaster ride at the Nobel Prize Museum

Posted on April 18, 2013 by christine mccartney

While in Stockholm last week, I had the opportunity to visit the Nobelmuseet, a museum chronicling and showcasing the creative endeavors of the past 112 years of Nobel Laureates’ work. As I walked up the steps facing Stortorget Square and made my way through the etched glass doors,  I imagined how I would bring this experience to my students, having no idea of the emotional rollercoaster I was about to get on.

The backstory is intriguing. Alfred Nobel made a name for himself even on his deathbed.  His controversial will, written in beautifully flowing cursive, was not well-received by many in his immediate family.  In fact, after a lifetime of success as an inventor and industrialist, he caused a prolonged dispute when he penned in his will that each year forward, a portion of his fortune would be awarded to persons making significant contributions in five major fields: physics, chemistry, physiology or medicine, literature and peace.

The current exhibit in the central hall of Nobelmuseet is dedicated to Swedish poet and winner of the 2011 Nobel prize in Literature, Tomas Tranströmer, including objects, texts and images representing his life’s work.  One of the central components of the exhibit was his extensive childhood insect collection featuring hundreds of carefully labeled specimens indicative of the artistry Tranströmer would later employ in his writings.

I was initially drawn to the cases of insects by the sheer aestheticism of them:  meticulous rows of precisely pinned bodies, colorful wings and appendages delicately protruding upwards in frozen poses, patterns of light reflecting off the glass separating living from lifeless…

…it was all very attractive at first glance.

But as I leaned in closer, I was struck by the pointlessness of it all.  Were all of these living creatures, I wondered, robbed of their little bit of time on earth, just to satisfy a child’s hobby?  Even if it was for the greater good of science, did that matter to the copris beetle I was staring at, a carcass stabbed through the chest with a metal pin? 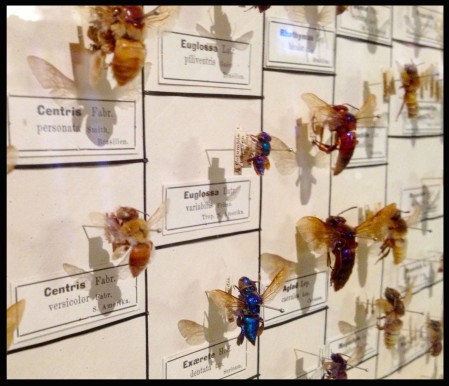 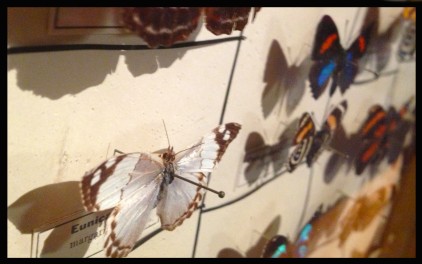 Knowing that I would want to explore this further, I took care to photograph them and then pulled out my iPhone, found a bench in a quiet corner off to the side and began exploring the necessity of this process.

I came across an article by biodiversity researcher, Greg Pohl, who defended the practice by stating that although “each species is important in the ecosystem, a given individual of each species [does] not have equal ecological importance.”

That’s all well and good. . . save for this specific, individual copris beetle, destined to dangle lifelessly in its glass tomb at the Nobel Museum.  That is the problem with being focused on the collective instead of the individual.

Now put this in the context of the thinking I’ve been doing lately about how standardized texts rely on the concept of an “average” learner, at the expense of the individual.  So whereas a few minutes prior I was thinking about the limitless possibilities for my students to become innovative creators, now I was feeling the tension of viewing them in light of a world that devalues the individual…and it was looking pretty bleak from where I was standing…

Perhaps Alfred Nobel was feeling the need to reconcile his role in the invention and production of dynamite when he first envisioned the Nobel Prize; or perhaps, in an even more noble gesture, he understood the significance of promoting innovation and ideas. Luckily there was much more to see in the museum and I spent the remainder of my time in awe of the contributions I was able to witness.

There is no doubt that by the end of my visit, the more than 800 Nobel Laureates showcased in the museum certainly inspired me to reflect on humankind’s ingenuity and potential, despite my rocky start with the insect collection.  As I finished my exploration of the museum’s corridors, I dreamed up ways to transfer some of that inspiration and motivation to my students back home.

I am a teacher, a wife, a proud aunt, a dog rescuer, a person who has been rescued by my rescued dogs, a hiker, a four time (phew!) cancer survivor, a runner, a tattoo addict, a vegetarian, an advocate, a friend and a happy traveller. Enjoy!
View all posts by christine mccartney →
This entry was posted in Uncategorized. Bookmark the permalink.